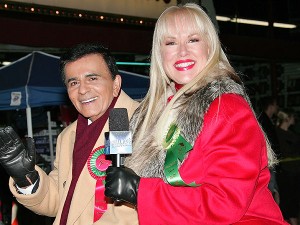 In order to pressure Jean to allow them to see Kasem, daughters Kerri Kasem and Julie Kasem, with more than a dozen friends and family members, held a protest in front of the Kasem home.  When that failed to convince Jean to change her mind, the daughters filed for conservatorship, in California.  A conservatorship court proceeding (called guardianship in some states) seeks to have an individual appointed to make decisions for someone who is not able to make proper decisions for himself, usually due to a medical condition like Alzheimer’s disease, dementia, or Parkinson’s disease.

The court held an initial hearing on Tuesday for the judge to determine if there was an emergency, necessitating immediate intervention.  A court-appointed attorney visited Casey Kasem and reported to the Judge that Kasem did not appear in distress and is receiving “adequate” care.  The Judge ordered Kasem to undergo a medical evaluation and set the case for a hearing on November 19th.  No conservator was appointed at the initial hearing, which is typical when no emergency exists.

In the meantime, Kasem’s children say they only want to be able to visit their father and don’t understand why he is being isolated.  Kasem’s wife Jean says that it is “toxic” for the children to visit, and she refused to elaborate publicly — saying only that the daughters know why they are not allowed to visit.  She says it’s not healthy for Casey Kasem’s children to see him.

Jean also points out that the children contacted both the police and adult protective services, and neither found a need for them to intervene.  This is typical unless there are overt signs of neglect or abuse.

Difficult cases like this one are far more common than most people realize (click here for other celebrity conservatorship cases we’ve written about).  In these situations, it’s not easy to determine when a court should intervene due to isolation from family members.  Is that what Casey Kasem wants?  Is it in his best interests?  Is he competent to make his own decisions?  These are all questions that can’t be answered simply.

Part of the dispute will focus on the validity of competing medical power of attorney documents.  Kasem signed one naming his daughter and her husband, a doctor, to make decisions for him in 2007.  Then in 2011, he apparently signed a different one appointing his wife in that role.  Both sides have challenged the validity of the other’s documents, questioning whether Casey Kasem was competent at the time, or whether he was improperly influenced to sign them.

If Casey Kasem was competent and free of undue influence when he signed the 2011 power of attorney, then it would control — unless the children can show that Jean Kasem is not acting in her husband’s best interests.  That question will focus in large part on whether she has legitimate reasons for preventing the children from seeing their ailing father.

Many families — especially in second-marriage situations — find themselves in a dispute over the proper care of an elderly loved one.  Spouses often do not get along well with adult children from a prior marriage.  The decision of when to turn to a conservatorship or guardianship court proceeding is always tough.

Once a court case like this is started, it can make a difficult family situation even worse. But often, such court cases are the only option for children who feel that their loved is being subject to abuse, neglect, or improper care.  Social isolation can be a big warning sign of neglect or exploitation in many cases as well.  But, each case and each family is unique.

If you, or a loved one, friend, or client, is facing a difficult and heated family situation involving the care of an aging family member, it may be time to consult with an attorney experienced in guardianship and conservatorship cases.  Most lawyers who specialize in probate litigation handle cases of this nature.  Working with an attorney knowledgeable and experienced in these types of cases is critical when you or someone you know may be facing a guardianship or conservatorship case.

Hopefully the Kasem family can find some peace and resolve this dispute before it is too late for anyone to spend time with Casey Kasem.