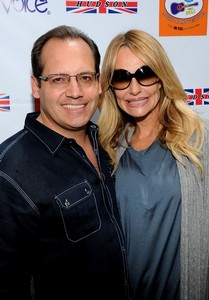 “I am deeply disgusted that Taylor would use her family law attorney to create cover, by lying to me over a period of days, on her behalf in writing that she would share the funeral location and time with my client’s mother, father, sister and other family members.  Instead, no one has contacted them and it is apparent now that Taylor is using this death to further injure the Armstrongs.  As if filing for divorce was not enough, this act of cutting out his mom, dad, and sister is frankly, despicable.”

Taylor’s attorney, of course, refuted these reports.  Taylor originally said she wanted to bury Russell in a cemetery in Los Angeles, but the family insisted he be returned to them in Texas.

It now appears everything has been worked out.  The two sides agreed that Russell’s body was to be cremated and some of the remains given to his parents.  Taylor will hold one funeral service for him in Los Angeles, and then his family will hold a second service in Texas.

Family fights after a loved one passes away are especially common when there is a divorce proceeding pending at the time of death.  Legally, Russell and Taylor were still married, which made her the next of kin.  This means that she had the legal right to determine when and how he would be buried and memorialized.  Even though Russell may not have wanted her to make those decisions, that’s the way the law works, at least in California and most other states.

And this may be just a preview of things to come.  Because Taylor is the widow, she has certain rights to his Russell’s estate.  Depending on the status of Russell’s estate planning, Taylor may now be in line to inherit the bulk of — or even all — of Russell’s assets.

Fights over the estate of someone who passed away in the midst of a divorce are especially common.  Dennis Hopper is another notable example.  And, as is evident from the Armstrong family, these fights aren’t always about money. Emotions can run very high when there is a broken relationship followed by a sudden death.

That’s why anyone in midst of a divorce should work with a good estate planning attorney and put their legal affairs in order even before the divorce is final.  Otherwise, there is no telling what the estranged spouse may receive.

In Gary Coleman’s case, for example, his ex-wife made the decision to terminate his life support, because she was still listed as the decision-maker in his advanced health care directive (which is like a living will).

Anyone going through a divorce should take extra precautions to update their estate planning … the sooner, the better.