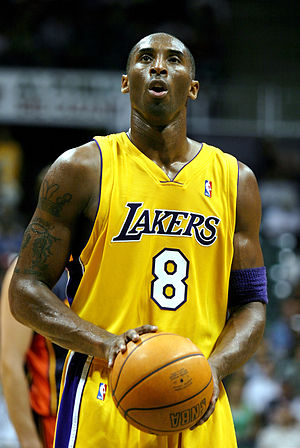 While Kobe is not suing his mother, and she has not sued him, the heart of the lawsuit boils down to a simple point — did Kobe give the items to his mother or not?  She signed a statement under oath, testifying to the fact that he said she could have the items years ago and that he no longer wanted them.

Kobe Bryant and his wife, Vanessa, both signed statements of their own, also under oath.  In them, they testified that Kobe never told his mother that.  To the contrary, they asked Pamela to return the items years ago so Kobe could give them to his children.  Kobe and Vanessa both stated, under penalties of perjury, that his mother’s statements were not true.  Kobe even accused his mother and the auction house of obtaining possession of items that he had in his house, without his knowledge.

ESPN reports that Kobe is devastated by the dispute.  While he wanted to clarify that he was only suing the auction house, not his mother, clearly the central fight is between mother and son.  If Kobe wins, his mother will have to repay $450,000 to the auction house for the advance — which she already spent buying a house.  Plus, Goldin Auctions stated in the lawsuit filing that she has hundreds of additional items, which are collectively worth $1.5 million or more.

Kobe recently posted on his twitter account, “When u give Give GIVE and they take Take TAKE at wat point do u draw a line in the sand? #hurtbeyondmeasure #gavemenowarning #love?”

It’s a sad dispute.  And unless one side or the other gives in, or they reach a quick compromise, the legal battle will not end anytime soon.  First, the two courts have to resolve the issue of jurisdiction — will the case be heard in New Jersey or California?

From there, it will turn primarily on the central issue of who is telling the truth — Kobe Bryant or his mother?  This is a factual question that can only be resolved by a jury after a full trial.  In other words, it will be a long road if there is no settlement.

Kobe may have to contend with a statute of limitations problem, however.  His mother claims he gave the items to her years ago, and even Kobe and Vanessa state they asked for the items back “several years ago.”  So, arguably, Kobe should have sued to get the items back then and not waited until now.  Under the law, he might have waited too long to take legal action to reclaim his property.

Kobe, of course, would contend that he never imagined his mother would hawk his items for cash, especially given their sentimental value to him, and there was no harm to letting her store the items.  So he never had a reason to sue before now.  Again, this will turn on the factual question of who is telling the truth.  It will likely be a long road before this question is answered.

This is the nature of disputed gift claims.  While it’s unusual for a star athlete to call his own mother a liar in court, lawsuits over whether items were actually gifted or not are far from uncommon.  They usually involve family members fighting in probate court about whether or not the person who died gave them something of monetary or sentimental value.

Just like with this case, those fights are usually difficult, emotional, and hard to resolve.  Determining who is telling the truth in a he-said, she-said situation is rarely quick or easy.

That’s why it’s so important for everyone to pass possession of property the right way, through proper estate planning, such as a will or trust.  That way, people can document who they want to receive what, without leaving it up to a fight about who is telling the truth.

We can only hope that Kobe Bryant’s family finds peace and a settlement soon.  This is no way to spend Mother’s Day.

5/14/13 Update — The USA Today ran an interesting story today, indicating that family members are split down the middle about who is telling the truth.  Kobe Bryant‘s father says Kobe gave the items to his mother, while Kobe’s sister sides with him.