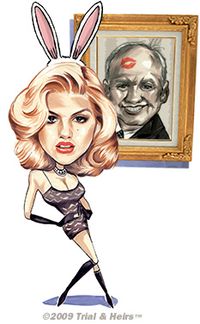 Then, this past March, the Court of Appeals again threw out the case (on a different legal ground).  Once again Smith’s estate, with the infamous Howard K. Stern at the helm, asked the Supreme Court to step in and review the Court of Appeals’ decision.

The request was a long-shot, at best.  The Supreme Court hears less than 5% of cases that it is asked to review (of the “paid” appeals; the percentages are far lower for appeals by indigent parties).  Given that Smith’s estate already won once, chances weren’t good that the Supreme Court would agree to step in again.

But they did!  Just a few days ago, the highest court in our country ruled that it would hear the case again.  You can read the very-technical questions that the nine justices will review on the case:  Download the Supreme Court cert. document.

To simplify a very technical matter, the Supreme Court will help decide whether the California district court judge who ruled in Smith’s favor, after a Texas probate court already ruled against her, had proper legal authority to do so.

[If you’re really interested in what questions the Supreme Court will resolve, the justices will decide how integral Smith’s legal claim was to her bankruptcy filing.  If her legal battle against the oil tycoon’s son was considered a “core” proceeding to her bankruptcy, then it was proper for the California court to rule in her favor.  If it was less directly related to her bankruptcy (therefore a “non-core” issue), the California judge would have lacked legal authority to rule for Smith after she already lost in the Texas probate court.]

That sure makes an interesting case sound boring, doesn’t it?  Here’s our prior article discussing what the case was all about, before it morphed into a hyper-technical bankruptcy law dispute.  Trust us, it started out as a pretty wild case before the focus switched to what judge had proper jurisdiction.

So what are the Smith’s team chances of success in the Supreme Court?  Pretty good, actually.  Recent statistics show that about 80% of all cases that the Supreme Court decides to hear end up being reversed in some manner.  The real hard part is getting the case heard; once that happens, there’s a high probability that Smith’s case will be reinstated, at least in part.

But, even if she wins, the legal proceeding would most likely return to the same Court of Appeals, which has already ruled against her twice.

In other words, even though it’s been 15 years of fighting, it could be many more years before it’s all done!  The Supreme Court won’t even hear oral arguments from the lawyers on this case until 2011, and if the case is returned to a lower court, that could take another 2 to 3 years (or more).

As we said in our book, Trial & Heirs: Famous Fortune Fights!, it was all because an “89-year old billionaire married a 26-year old stripper”.  No one ever said that true love was easy!

You can visit our new and improved website to read more about our book, which discusses this case and dozen more celebrity battles to help people learn from celebrity errors so they can protect their heirs.