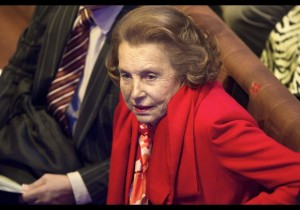 The second richest woman in the world, Liliane Bettencourt, has been declared mentally unfit to manage her affairs by a Judge in France yesterday.  The decision grants control of her financial affairs to her only child, daughter Francoise Bettencourt-Meyers, and grandsons Jean-Victor and Nicolas.  Bettencourt-Meyers has been fighting for years to protect her 88-year old mother, who has been victim to financial exploitation to the tune of more than one billion dollars, according to an earlier lawsuit.

Bettencourt suffers from “mixed dementia” and “moderately severe” Alzheimer’s disease, according to a medical report relied on by the Judge in making her decision.  Her mental decline sparked a family court fight.  It began three years ago when Bettencourt-Meyers started a lawsuit to protect her mother from photographer Francois-Marie Banier, who she claimed had charmed the elder Bettencourt out of assets worth almost one billion euros (about 1.4 billion dollars).  She also named Banier as sole heir in a new will and as beneficiary to vast life insurance policies.

Bettencourt was so furious with her daughter for the lawsuit that she vowed never to see her again.  She said that Banier was a close friend and nothing was wrong with the gifts.  She felt she was still mentally sharp.

During the course of the lawsuit and related court proceedings, it was revealed that Bettencourt had hundreds of millions of dollars in Swiss accounts and was not paying taxes on the money.  This became a national scandal because the wife of  France’s finance minister helped invest Bettencourt’s assets.  The minister, Eric Woerth, lost his position.  Even France’s President, Nicolas Sarkozy, was dragged into the scandal when it was alleged Bettencourt gave illegal cash donations to his election campaign.  Sarkozy denied the allegations.

Eventually, in late 2010, the legal proceedings filed by Bettencourt’s daughter were settled.  Banier agreed to renounce the life insurance and Bettencourt agreed to redo her will.  She promised to have nothing more to do with the man described by many as  “dandy” and a “charmer”.  The family reconciled and agreed that Bettencourt’s lawyer, Pascal Wilhem, would manage her financial affairs and protect her.

A few months ago, the family feud returned to court when Bettencourt reportedly invested 170 million euros in a company belonging to the Wilhem’s client.  This prompted Bettencourt-Meyers to again file legal proceedings to protect her mother.  Wilhelm was said to have encouraged the deal, which Bettencourt-Meyers felt was a conflict of interest.

The Judge must have agreed and shared the family’s concern, because her ruling yesterday gave control over the vast financial holdings to Bettencourt-Meyers and her sons.  In doing so, she removed Wilhem from managing Bettencourt’s fortune.

How vast is that fortune?  Forbes last pegged Liliane Bettencourt at #15 on its list of the world’s billionaires.  Her net worth was estimated at $23.5 billion dollars.  She is the largest shareholder of L’Oreal, which was founded by her father.  Now the family will manage that fortune instead of outside advisers accused of “scheming” against Bettencourt.

Bettencourt’s lawyer vows that she will appeal the decision.  Bettencourt recently said in an interview that she would leave France rather than allow her daughter to take control of her life.

While it took three years of fighting in court, and public scrutiny that sparked multiple political scandals, Francoise Bettencourt-Meyers did what she had to do to protect her elderly mother from what she felt was extreme financial exploitation.  It’s an epidemic in our country as well, where there are an estimated 5 million cases of financial abuse of seniors each year.

How can you protect your elderly family members?  Here are the National Center on Elder Abuse’s 10 Warning Signs and Symptoms to watch out for.  Awareness is the first step towards prevention.

Unfortunately, if you feel that you have an elderly family member who may be a victim of financial abuse, you may have to follow the footsteps of the Bettencourt family and seek conservatorship or guardianship in court for protection.  The key is to act quickly, before it is too late.

Even though your family fortune may not be worth billions, the danger of financial exploitation is still very real.