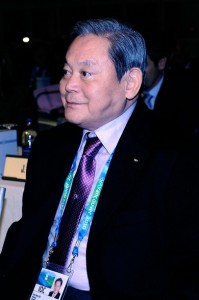 In February, Kun-hee’s older brother, Lee Maeng-hee, filed the suit in Seoul, South Korea. Now joined by two other family members, the lawsuit claims that when their father, Samsung Group founder Lee Byung-chull, died in 1987, he left millions of shares in Samsung Life Insurance (the world’s 14th largest insurance company) as well as preferred stock in Samsung Electronics and cash, in trust.  Specifically, he placed the asset into the name of Samsung executives for the benefit of his family.  Lee Kun-hee then wrongfully took the stock and cash and transferred it into his own name, rather than dividing it among the heirs as he was supposed to, according to the allegations.

The U.S. value of the stock is around $877 million.  If Kun-hee loses, it could potentially cause him to lose his controlling interest in the  Samsung Group, which controls dozens of companies, including Samsung Electronics.

The eldest brother said he never understood why his father did not leave controlling interest to him, which is traditional in Korean society.  Last week, he accused his younger brother, Kun-hee, of acting childish and greedy.

If the allegations are true, why did this take 25 years to come to light? Maeng-hee says he’s been trying to find out what happened to the stock for 25 years.  Events started to come to light in recent years because of a corporate whistleblower who used to be Samsung’s top attorney.

In 2007, the attorney brought to light that Kun-hee was evading taxes by holding stock and other assets in the name of other people.  Mr. Lee was prosecuted, found guilty of tax evasion, and forced to step down as the Samsung Group chairman. But South Korea’s President later pardoned him, after he paid a large fine and transferred the stock to his own name.  His three-year jail sentence was rescinded.

Prosecutors also tried to bring claims against Lee Kun-hee based on widespread abuses, including bribery and illegally trying to transfer controlling interest in Samsung to his son, again based on information from the whistleblower.   They lacked sufficient evidence of the bribery charges and weren’t able to secure convictions on the rest.

Perhaps that is why Lee Kun-hee is so confident about winning this lawsuit. He vows to fight the suit to South Korea’s highest court, refusing to settle. Last week, he publicly ridiculed his older brother, saying he had been exiled from the family and was not permitted to look at him in the eyes.  Lee Kun-hee told reporters when discussing his older brother, “How dare he say my first name?”

It’s a wonder that such rich and powerful businessmen wouldn’t do the proper planning to protect their heirs from court battles like these.  Business succession planning shouldn’t be done through secret arrangements, but through the proper estate and corporate planning.

It’s a lesson for everyone, especially those who own businesses.  Don’t wait until it’s too late to plan how your assets, including your ownership interest in any business you own, will pass onto the next generation.  Choose those who will be in control after you’re gone carefully.  Make sure that you document your planning the right way with an experienced estate planning attorney, and if necessary, a business succession attorney as well.